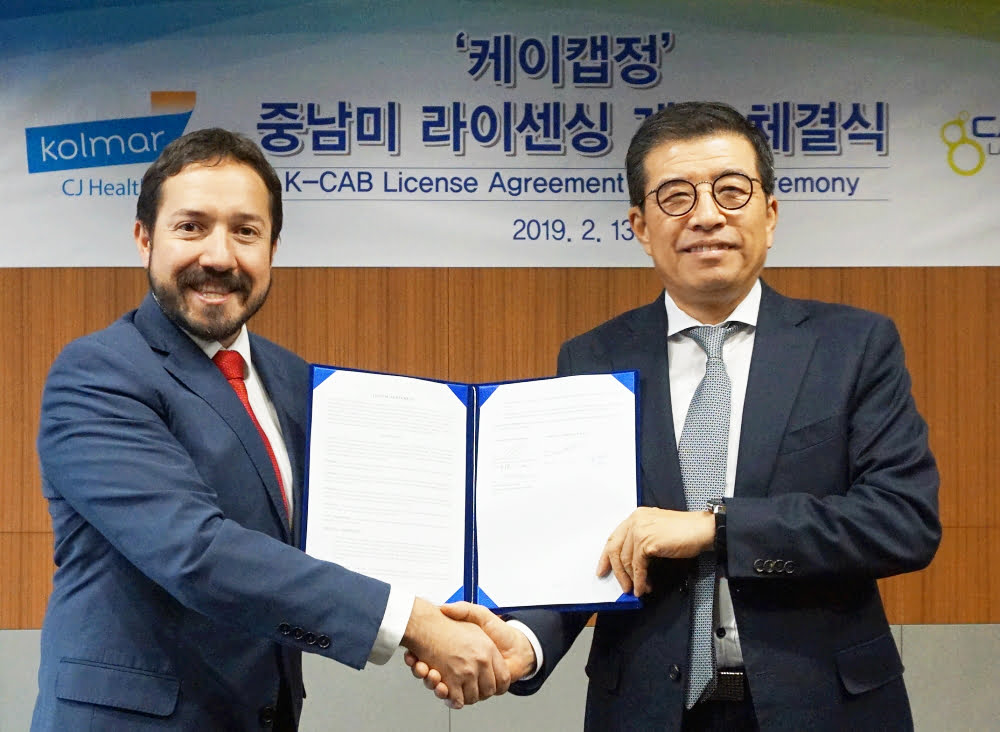 K-CAB Tab., the new drug for gastro esophageal reflux disease developed by CJ Healthcare, will be distributed to 17 countries across South America through a $84 million dollar licensing deal.

K-CAB Tab., which was approved as Korea’s 30th home grown novel drug, has succeeded in licensing agreements with China’s Luoxin in 2015 in a $ 95.29 million dollar deal. In addition, CJ Healthcare successfully agreed on a licensing agreement with Vimedimex Medi Pharma of Vietnam last year in order to penetrate Asian markets.

K-Cab will be launched once its domestic health insurance drug listing is complete, and will export to China, Vietnam and 17 countries across South America which will lay a strong foundation to help K-CAB become a globally renowned drug.

K-CAB Tab. is the first novel drug in Korea to gain approval for its new mechanism of action (P-CAB; potassium competitive acid blocker). It is gaining attention as the next-generation therapeutic agent in the market thanks to its advantages such as ‘rapid drug efficacy’ and ‘night time gastric hyper-secretion inhibition’, overcoming limitations of conventional PPI-based products that have been prescribed mainly for gastro esophageal reflux disease in the past.

Through this agreement, CJ Healthcare will receive from Carnot, $84 million dollars in exchange for a deposit, licensing fees, sales royalties, and product supply. K-CAB is scheduled to be launched in 17 countries in South America through Carnot starting with Mexico in 2022.

Carnot is a Mexican pharmaceutical company founded in 1941 which has the number one digestive pharmaceutical market share in Mexico (September 2018, IQVIA). In addition to Mexico, it has subsidiaries and branches throughout South America including Brazil, Argentina and Colombia.

CJ Healthcare CEO Kang Seok-Hee qutoed, “K-CAB Tab., which name comes from the meaning ‘Korean P-CAB –based new drug’, has demonstrated the superiority of Korea-made novel drugs beyond Asian countries such as China and Vietnam and even to South Amercia.” He added that, “We will continue to penetrate overseas markets and develop K-CAB into a blockbuster product in the global gastro esophageal reflux disease treatment market.”

Carnot CEO Guy Jean Leon Savoir García quoted, “K-CAB is a novel drug that has proven its efficacy and safety through numerous clinical trials.” He added, “This licensing agreement signing with CJ Healthcare is a crucial step for Carnot that will further strengthen Carnot’s position in the digestive pharmaceuticals market.”

CJ Healthcare’s K-CAB Tab. was approved for its 50 milligrams dosage and has completed all launching festivities, concluding its preparation activities with a symposium which 800 medical professionals attended last month.